The legendary R.C. Slocum graced the first cover of 12th Man Magazine on Aug. 24, 1996. The former Texas A&M football coach is dressed in a suit and wearing a smile, with his arms casually resting on an Aggie helmet. Volume 1, No. 1 began with the headline: “R.C. Slocum: Leading The Aggies Into A New Era In The Big 12.”

Twenty-five years later, much has changed.

Jimbo Fisher is coaching the Aggie football team in the school’s 10th season in the Southeastern Conference.

The magazine, though, continues to tell the stories of A&M’s 20 varsity sports and its student-athletes, coaches and donors. This is Volume 26, No. 3, the 405th published issue of 12th Man Magazine and the first printed edition since spring 2020. The magazine has been available only online since the COVID-19 pandemic began.

“Everything has changed so much since the days before the internet and instant news,” said Rusty Burson, who began freelancing for the magazine in 1996 before being hired full time two years later. “Still, I’ve always felt the magazine has so much more of a shelf-life than newspapers or anything on the internet. The magazine has changed a lot, but I’m proud of the fact that it’s still a publication that people enjoy.”

The magazine is a memorial to Homer Jacobs, who died seven years ago from an intestinal aneurysm. Jacobs, Class of 1987, was the first editor of 12th Man Magazine. He worked as the sports editor at the Sherman Democrat, Galveston Daily News and Aggies Illustrated before launching the official publication of the 12th Man Foundation in 1996.

Jacobs proved to be a perfect fit for the 12th Man Foundation.

“Homer loved Texas A&M, and you can say that about a lot of people,” said Brad Marquardt, A&M’s assistant athletics director for athletics communications who recommended Jacobs. “But he was a great storyteller, and I think he had an innate ability to tell stories about Texas A&M in a way that made sense to his audience. That’s the way I felt about him. He always told a good story.”

In 1996, Jacobs presented an idea for a magazine covering Aggie Athletics. He sought to go beyond the score, stats and a few quotes, digging deeper into games and student-athletes. Jacobs had inside access, and the 12th Man Foundation had resources to allow donors behind the curtain of Aggie Athletics with a professional publication that would sometimes serve as a keepsake.

“They couldn’t get enough of it, and the magazine grew and grew. It was a showcase for the 12th Man Foundation, and a showcase for Aggie Athletics like no other.” 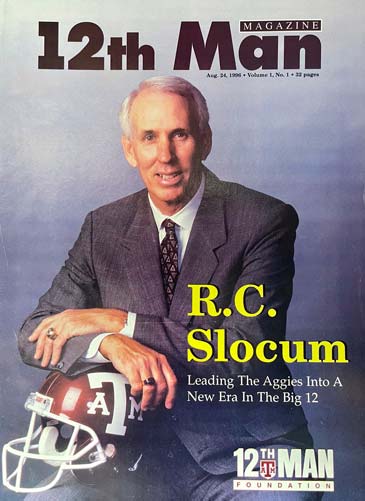 “Other universities couldn’t believe that we were able to do that, and several schools copied us. There’s a great history of the magazine, and it has served as a great tool for us.”

“This was all Homer’s idea,” said Jerry Cox, who served as president of the 12th Man Foundation’s Executive Committee in 1996. “He said, ‘We ought to get personal, with athletes’ background, what they’re studying and why they came to A&M.’ The leadership at the 12th Man Foundation was very, very supportive, and that’s when we decided to make a full-fledged magazine. All the people who received it were enthusiastic supporters of Aggie Athletics, but they’d never seen anything like this. No one had. There wasn’t another one around at that point. This was just his brainstorm.

“Homer was humble; he was smart; he had vision; and he was a maroon-blood if I’ve ever seen one. He was totally there. Once it got going, it gained momentum because everyone loved it. They couldn’t get enough of it, and the magazine grew and grew. It was a showcase for the 12th Man Foundation, and a showcase for Aggie Athletics like no other.”

In his first editor’s note in the debut edition, Jacobs wrote an introduction to 12th Man Magazine: “Inside this slick magazine, you will find more features, more insightful commentary and more dramatic color photographs than available in any publication covering Texas A&M Athletics. . . . 12th Man Magazine will be your most complete source, straight from the heart of Aggieland.”

It was the first magazine produced exclusively by an athletics fundraising organization.

The first two years of the magazine featured a color cover with primarily black-and-white photography inside. Jacobs convinced Miles Marks, the executive director of the 12th Man Foundation from 1998-2012, that to do it right, 12th Man Magazine needed to be full color. Despite the significant cost increase, the decision to go full color is something Marks calls “transformational.”

“It became a fundraising tool,” Marks said. “We put more and more stories of donors in there and what they had done to inspire other people. Rusty had a great series of, ‘Where are they now,’ on former athletes, and that got former athletes reengaged.

“Other universities couldn’t believe that we were able to do that, and several schools copied us. Oklahoma State I know put out its own magazine, and for a while, at least, LSU did it as a fundraising tool. There’s a great history of the magazine, and it has served as a great tool for us.” 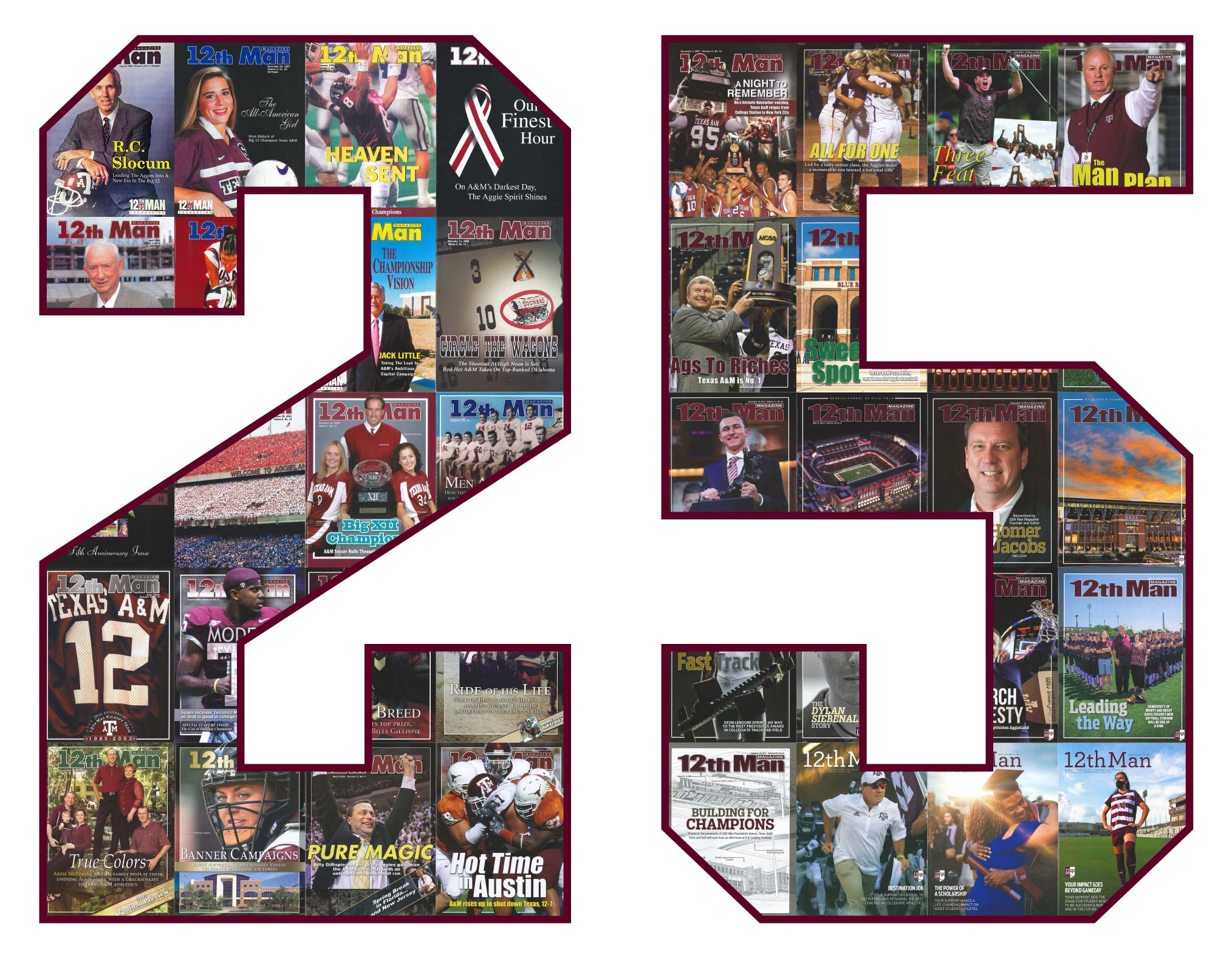 For almost 20 years, approximately 19 issues of the magazine were produced annually with an issue published after every Aggie football game. Jacobs and Burson worked through the night after every gameday, finishing their stories before the magazine printed on Sundays and mailed on Mondays.

As it returns to print with this milestone edition, 12th Man Magazine is scheduled to be published and mailed to donors three times annually. It remains a benefit to any 12th Man Foundation member with a donation of at least $150.

“Without a doubt, it was one of the most important undertakings during my tenure there,” said Frank Shannon, the executive director of the 12th Man Foundation from 1990-97. “We previously had the Sports Hotline, a weekly newsprint tabloid, that had served its purpose in the ’80s. We had presented the idea of a magazine a few years earlier, but the timing just wasn’t right. Finally, when we did go to a full-color, slick, weekly magazine during football season, it just gave us a ton of awareness and helped us engage more people than ever before for Aggie Athletics.

“But without Homer, I don’t know how we would have done it. Homer just put his heart and soul into it, and it came through in his stories. It was like family the way Homer captured what was going on and what was important.”

Every issue of 12th Man Magazine, though, is a reminder of Jacobs. It is his brainchild.

“For so many years, Homer was a single guy,” said True Brown, who worked for the 12th Man Foundation from 2004-12 and 2015-18 serving in a variety of roles with 12th Man Magazine along the way. “His love affair was with Texas A&M and the Aggies. It really was. He could break down the backup left tackle or the power forward on the women’s basketball team or the No. 6 singles tennis player. He lived it and breathed it for so long. When you ask what made him so good and so perfect for the job, it was his love.”