The 12th Man Foundation announced the recipients of the 2014 E. King Gill Award on Thursday, November 27, 2014. Alice and Erle Nye '59 were presented with the prestigious award at halftime of the Texas A&M football game versus LSU on Thanksgiving at Kyle Field.

The award is presented each year by the 12th Man Foundation to honor those supporters who have generously helped the Foundation realize its mission of "funding scholarships, programs and facilities in support of championship athletics."

In addition, the E. King Gill Award recognizes those who have shown the commitment as a volunteer advocate of the athletic program through exemplary service and leadership while demonstrating a high level of distinction as a role model in career, service and ethics.

The honorees of this prestigious award will be recognized on an engraved plaque in The Zone's Stepp Grand Lobby, located just outside the 12th Man Foundation offices.

Alice and Erle Nye are the consummate Aggies. They have generously supported every major capital campaign benefitting Texas A&M athletics. They are also the namesakes of the Nye Academic Center in the Bright Football Complex. Erle Nye has previously been honored as a Distinguished Alumni of Texas A&M University and has also served as Chairman of the Board of Regents for the Texas A&M University System.

"We are pleased to honor Alice and Erle Nye as the 2014 recipients of the E. King Gill Award," 12th Man Foundation President and CEO Skip Wagner said. "Alice and Erle have been great Aggies over the years and we are elated to honor them with our most prestigious award." 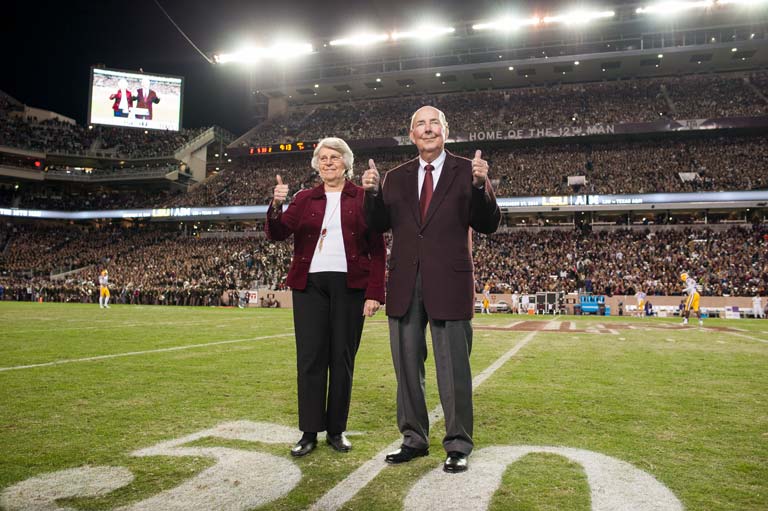 "Alice and Erle have been great Aggies over the years and we are elated to honor them with our most prestigious award."