Leading the way for a new era of excellence for Texas A&M Athletics, the 12th Man Foundation proudly salutes April and Jay Graham '92 for their transformational gift to the Centennial Campaign.

Leading the way for a new era of excellence for Texas A&M Athletics, the 12th Man Foundation proudly salutes April and Jay Graham '92 for their transformational gift to the Centennial Campaign.

The Grahams helped ensure a successful launch of the campaign with their historic $25 million lead gift, which represents the single largest capital commitment ever made in support of Texas A&M Athletics. Their early and unwavering support was vital toward the campaign's ambitious vision of positively impacting the academic and athletic development of all Aggie student-athletes.

“This is a family commitment,” said Jay Graham. “We've been blessed as a family and for us it's important to give back. Our athletics department is the front porch of the university, and the Centennial Campaign is a commitment to ensure our athletics programs remain leaders nationally and a source of pride for Aggies everywhere. Student-athletes don't just come to Texas A&M to play their sport. We want them to perform at their highest level athletically, and we also want to develop them as students, in their personal lives and as Aggies who will go on to make us proud after their playing career is over. It takes facilities and support. That's really what the Centennial Campaign is all about.”

After earning his petroleum engineering degree from Texas A&M, Jay Graham launched an immensely successful career in the oil and gas industry. Graham co-founded WildHorse Resources LLC in 2007 and currently serves as the Chairman and CEO of Spur Energy Partners.

As the Grahams enjoyed success in their professional lives, the family has always sought to keep close ties to Texas A&M and give back when possible. In support of Aggie Athletics, the Grahams are season ticket holders and have contributed toward capital projects such as the historic redevelopment of Kyle Field, Bright Football Complex and Texas A&M Lettermen's Association facility as well donated to A&M's football, men's basketball, women's basketball, baseball and men's golf programs.

“Jay and April truly embody the spirit that makes Aggieland so special,” said Texas A&M Head Football Coach Jimbo Fisher. “There is no better example of our core values than those exhibited by the Graham family. I am extremely grateful for their monumental investment in our program, our future and the lives of our student-athletes across all sports. I cannot overstate what their friendship and support mean to our Aggie family.”

Beyond their commitment to Aggie Athletics, the Grahams were pivotal in the creation of the Petroleum Ventures Program at Texas A&M University, a collaboration between Mays Business School and the Harold Vance Department of Petroleum Engineering. They have given numerous scholarships through the Texas A&M Foundation for Petroleum Engineering students and are proud sponsors of the new Aggie Park as Pillars of the Aggie Network.

“The generosity of Aggies is legendary, and Jay and April Graham's gift is the kind of generosity that makes sure A&M has the resources to succeed,” Chancellor of the Texas A&M University System John Sharp said. “We are extremely grateful to the Grahams for this gift.” 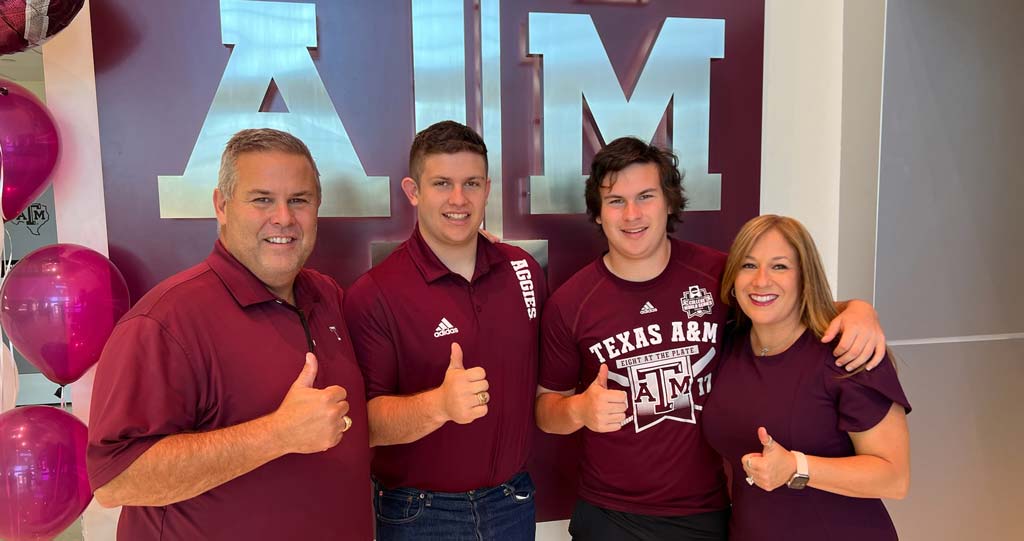 “April and Jay Graham have been incredibly generous supporters of Texas A&M, giving selflessly of their time, treasure and talent across many parts of the university,” said Texas A&M President M. Katherine Banks. “I had the pleasure of working with the Grahams to develop the innovative Petroleum Ventures Certificate program, preparing our engineering and business students for successful careers in the energy industry. We have further been fortunate to benefit from Jay's formidable leadership skills through service on department and college advisory boards, and the Board of Regents for the A&M System.”

“We're incredibly appreciative of April and Jay Graham, who have consistently gone above and beyond in support of Texas A&M,” said 12th Man Foundation President and CEO Travis Dabney '96. “They took the time to understand the vision for the Centennial Campaign and the impact it's going to make on our student-athletes. Their generous support set the campaign in motion and has proved to be the cornerstone we're building upon.”

In addition to the Grahams' generous philanthropic support, Jay has continuously given back to Texas A&M through his leadership. In 2019, he was appointed to the Texas A&M University System Board of Regents by Governor Greg Abbott. He also served on the 12th Man Foundation Board of Trustees from 2018-21 and currently serves on the Texas A&M School of Petroleum Engineering Industry Advisory Board, College of Engineering Advisory Council and the Chancellor's Century Council.