In July 2020, after three rounds of interviews, the 12th Man Foundation selected eight students to be the first to participate in a one-of-a-kind leadership organization.

The Collegiate Council was created to help educate the student body on the mission of the 12th Man Foundation while providing members with an opportunity to gain professional experience in the world of fundraising and college athletics.

As a proud member of the inaugural Collegiate Council, I could go into detail about every event we worked or how many hours we spent in the 12th Man Foundation office. However, I feel that it is more important to illustrate what this program means to those lucky enough to be included.

“It was through my involvement in Collegiate Council that I came to fully understand what the 'Aggie Spirit' I experienced as a child embodied.”

Participation in Collegiate Council has impacted my life in three key ways. First, it has been a catalyst for professional growth amidst a pandemic in which professional learning opportunities are rare. Second, as a member of the Texas A&M equestrian team, it has provided me with a unique outlook on what it means to be a student-athlete at one of the most competitive universities in the nation. And finally, it has given me a greater understanding of what it means to fully embody the values of the 12th Man.

It was in April 2020 - a month after my junior season ended prematurely, three weeks after I had moved home with my parents and one week after my summer internship was canceled - that I found out I was selected as an inaugural member of the Collegiate Council. Considering the circumstances, I was filled with both excitement and uncertainty.

I was honored to have been chosen to represent the 12th Man Foundation, but I was unsure how I could contribute from a professional standpoint. When applying, I anticipated completing a marketing-focused summer internship that would have provided me with relevant expertise within a professional environment.

I now had serious doubts about how the cancellation of my summer internship would impact me both in my performance as a member of Collegiate Council and as a candidate for full-time employment post-graduation.

These doubts dissipated the second I walked into the 12th Man Foundation office.

During a one-on-one meeting with Callie Boenigk, the 12th Man Foundation's manager of Annual Fund who supervises the Collegiate Council, we were able to pinpoint a few areas in which I could focus my professional development.

I was assigned to tasks that allowed me an opportunity to showcase many of the skills I had acquired in the classroom while challenging me to grow professionally without the fear of failure. 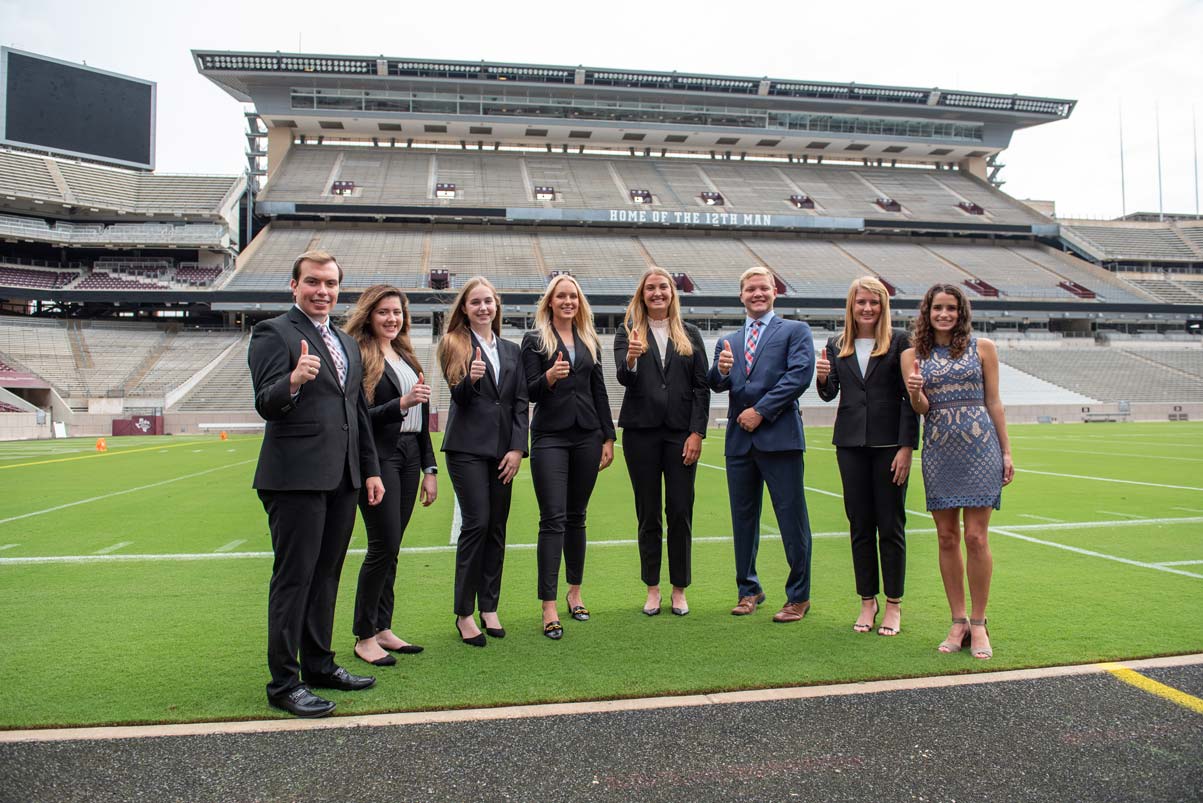 I believe these experiences empowered me to take on greater leadership responsibilities within my sport and within the various organizations in which I was involved.

Finally, the variety of professional development workshops focused on self-advocacy, interviewing, and digital networking played a major role in my acceptance of both an internship and a full-time offer upon graduation.

As a student-athlete, I thought I knew everything there was to know about Aggie Athletics. I was active in the Student Athlete Advisory Committee, I was involved in community service and I made an effort to expand my network through participation in student-athlete development programs.

After my experience with Collegiate Council, I know I lacked a complete understanding of how much was going on behind the scenes to ensure that I had the best experience. Student-athletes have a high level of exposure to the hard work put in daily by academic advisors, coaches, nutritionists and trainers. However, most of us are unaware of the depth of support we receive from the 12th Man Foundation.

Behind every scholarship, practice, workout, and meal, there is an entire team of people working tirelessly to ensure that every student-athlete is provided with the opportunity to pursue their dreams.

“As student-athletes, we often take for granted what the 12th Man Foundation does for us,” said Black, who is a distance runner for the A&M cross country and track and field teams. “These people are the ones who make the meets, games and trips all possible.”

The 12th Man Foundation opened my eyes to how thousands of people I have never met believe in my ability to succeed as an athlete, student and person. Unconditional support is rare, and I'm excited to provide that same support as a Young Alumni member now that I'm a proud A&M graduate.

Before I knew what college was, I knew I was going to be an Aggie. My father was a Texas A&M graduate and even though my mother, a University of Texas graduate, swore she would never wear maroon, you can find her in a Texas A&M equestrian hat almost every meet day.

I grew up watching my father get stopped in airports, amusement parks and even a restaurant in Italy by other Aggies who were eager to swap stories about the Dixie Chicken, Aggie Athletics and their most memorable professors.

When I was younger, I firmly believed that if you graduated from Texas A&M and wore your ring, you magically had friends wherever you went.

But I'll be honest. For three years of my college experience, I didn't feel that same magic I had experienced when I was younger.

Athletics is a grind, and trying to balance constant athletic improvement with academic excellence had me stretched thin.

When the world seemingly stopped as a result of COVID-19, I was devastated. For three years, I had dedicated myself to my sport and to the classroom. Now, I was being told I couldn't do either.

Upon my return to College Station, everything felt different.

It was through my involvement in Collegiate Council that I came to fully understand what the “Aggie Spirit” I experienced as a child embodied. It wasn't inherent in a place, an outcome of a game or a specific class. It's in every handshake, every howdy and in every heart. 12th Man Foundation members, you are the Aggie Spirit.

Fellow inaugural Collegiate Council member Abel Gonzalez said, “Through the selfless service of the 12th Man Foundation and its members, the Aggie family was able to come together and stand alongside our student-athletes.”

Looking back at the steps this group has taken after such a short period of time, I know what answer I will receive in the coming years. It is a group filled with leaders who have a comprehensive understanding about what it means to be an Aggie. They are a reflection of the 12th Man Foundation staff as well as its members - a united and loyal group committed to selfless service by way of Texas A&M Athletics.

“I can confidently say that the council provided me with the very best experience during my college career,” said Lopez, “and I cannot wait to see what next year's council will accomplish.”