Both first-generation Aggies, Damon and Cindy Diamantaras '92 take great pride in supporting the school they both hold so dear. Their desire for excellence and true passion for Texas A&M drives their generous effort to provide student-athletes with the best opportunities possible to succeed. Firm supporters of the 12th Man Foundation's mission, the Diamantaras family believes in the significance of contributing to scholarships, programs and facilities that push A&M to the top amongst collegiate athletics.

“The amount of competition that exists in the NCAA is intense, and recruits have the opportunity to go anywhere in the country for their profession or to be an athlete,” Damon said. “You have to do what you can to make sure that Texas A&M is the destination.”

Aggieland was certainly the destination for Damon and Cindy, as neither of them considered another school to be an option for their college education. Rebelling against a full family of Arkansas Razorback fans, Cindy followed her heart to A&M after a warm welcome to Aggieland on her campus tour. Likewise, Damon couldn't quite imagine fitting in at any other university quite the way he would at A&M, and he just couldn't resist the excitement of becoming an Aggie.

“From the day I walked on campus my life changed,” Damon said. “It defined me as a person and I owe a lot to the University. I will always speak highly of Texas A&M.”

As first-generation Aggie graduates, the couple has certainly taken pride in keeping their newfound traditions alive, as both of their sons (Evan '20 and Nicholas '22) are currently enrolled at A&M.

Shortly after leaving College Station, the Diamantarases took a brief hiatus from A&M athletic events while they worked to build their careers and settled into their new home of Houston. It wasn't until Damon's serendipitous return to Kyle Field five years later that the desire to give back truly sunk in.

“A buddy of mine invited me to go to the 1998 Nebraska game, and that sealed my fate,” Damon recalled. “From that point on I was back in the game. I think I went to 40-plus home games in a row after that.”

After becoming football season ticket holders, the couple soon recognized the importance of donating to A&M Athletics. Their impact has continued to grow and can be seen across various sports including basketball, golf and football in facilities such as the Shannon '86 and Wayne '85 Roberts Basketball Student-Athlete Center and in the Davis Player Development Center.

In addition to building high-caliber facilities, the Diamantarases also support the efforts in place to keep them up-to-date and considered amongst the best in the nation. The couple made a meaningful donation to the Davis Player Development Center project in 2012, and are now loyally contributing to its improvements seven years later.

“If it's necessary for the athletes, you buy into the vision,” Damon said. “I think Jimbo (Fisher) said it best, 'You either live in vision or you live in circumstance,' and I like to live in vision. You have to continue to do those things that will get you to the next level. And once you get there, you have to sustain the facilities so that you don't fall behind.”

Damon and Cindy certainly support the vision for A&M, and have made impactful efforts in order to help see it through to the finish. They believe in the strength of being an A&M graduate, and do what they can to ensure the camaraderie of the university is extended to all who consider becoming an Aggie.

“You have to have a strong athletics department to draw people to the school,” Cindy said.

The Diamantarases give back in order to equip Aggie Athletics with the tools they need to bring the best to A&M.

“If you're going to win, you have to get the best athletes to want to come to Texas A&M,” Damon said. “You have to have the best offerings for those athletes. That includes facilities, that includes coaching and that includes education.”

Looking forward to the future, Damon and Cindy are eager to see the Aggies' success rise from the dedication being poured into the program by all who support it. When it comes to the Diamantaras' support, the family sees no end in sight.

“I love everything about Texas A&M,” Damon said, “and I believe we'll be lifelong givers to the 12th Man Foundation.” 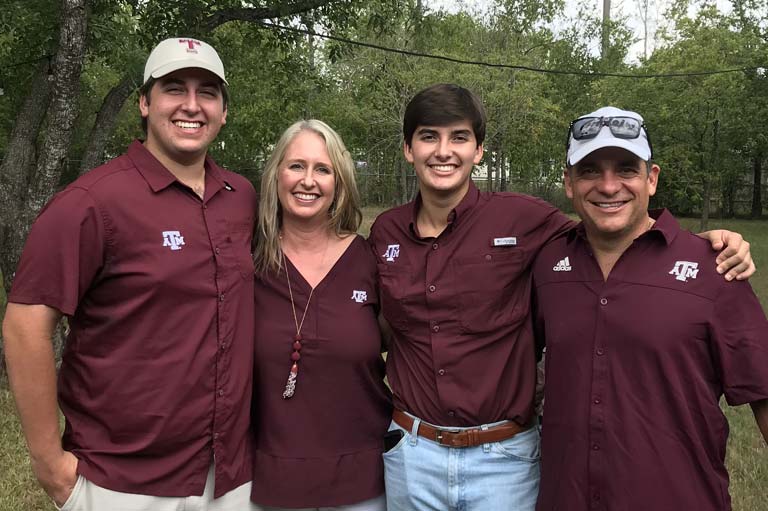 
“I love everything about Texas A&M, and I believe we'll be lifelong givers to the 12th Man Foundation.”

With their generous support and passion for Aggie football, Damon and Cindy Diamantaras '92 are helping provide championship-level facilities for A&M student-athletes.

Join Damon and Cindy in their support of the Davis Player Development Center project. Contact Lauren Hickey at 979-260-7595 or by email