Tyra Gittens hung the handmade poster on the wall in her apartment, above the television, so she can't miss it. It's the first thing the Texas A&M track and field star sees when she wakes up and the last thing she sees when she goes to bed. Of course, the words and numbers on the poster don't leave Gittens' thoughts much.

“Ultimate Heptathlete” headlines the poster, with the how and the why, and it lists reminders and a points goal for each of the seven events. The “ultimate” goal for Gittens is 6,816 points. That would rank 18th all time.

“Sometimes you have to reread your goals,” said Gittens, who will graduate from A&M in December 2021. “For a long time, I just kind of really competed based off my talent, my raw talent, and I never actually applied myself. You have to take every opportunity and run with it. Don't let the day get away like coach (Pat) Henry says.”

Gittens set a personal-best, and bettered her own school record, with 6,418 points in the heptathlon during the SEC Outdoor Track & Field Championships in May. That ranks third on the all-time collegiate list.

“She has improved every semester she's been here,” A&M assistant coach Sean Brady said. “She's at the point now that she's the collegiate record holder in the pentathlon. The bright side of things is she still has room to improve. Her growth and development have just improved by leaps and bounds since she was a freshman. As a multi-event athlete, she's maturing to the point where she understands the big picture and the processes that it takes to become one of the best that's ever been. That took some time.”

The heptathlon entails running, jumping, throwing, and requires speed, strength, endurance and mental toughness. Heptathletes compete in the 100-meter hurdles, high jump, shot put and 200 meters on the first day and the long jump, javelin and 800 on the second, compiling points based on time, height or distance.

“Being from a family of seven kids, my parents did not know how they were going to get us all to college. My scholarship has taken that worry away from my parents and for that alone I am forever grateful.” 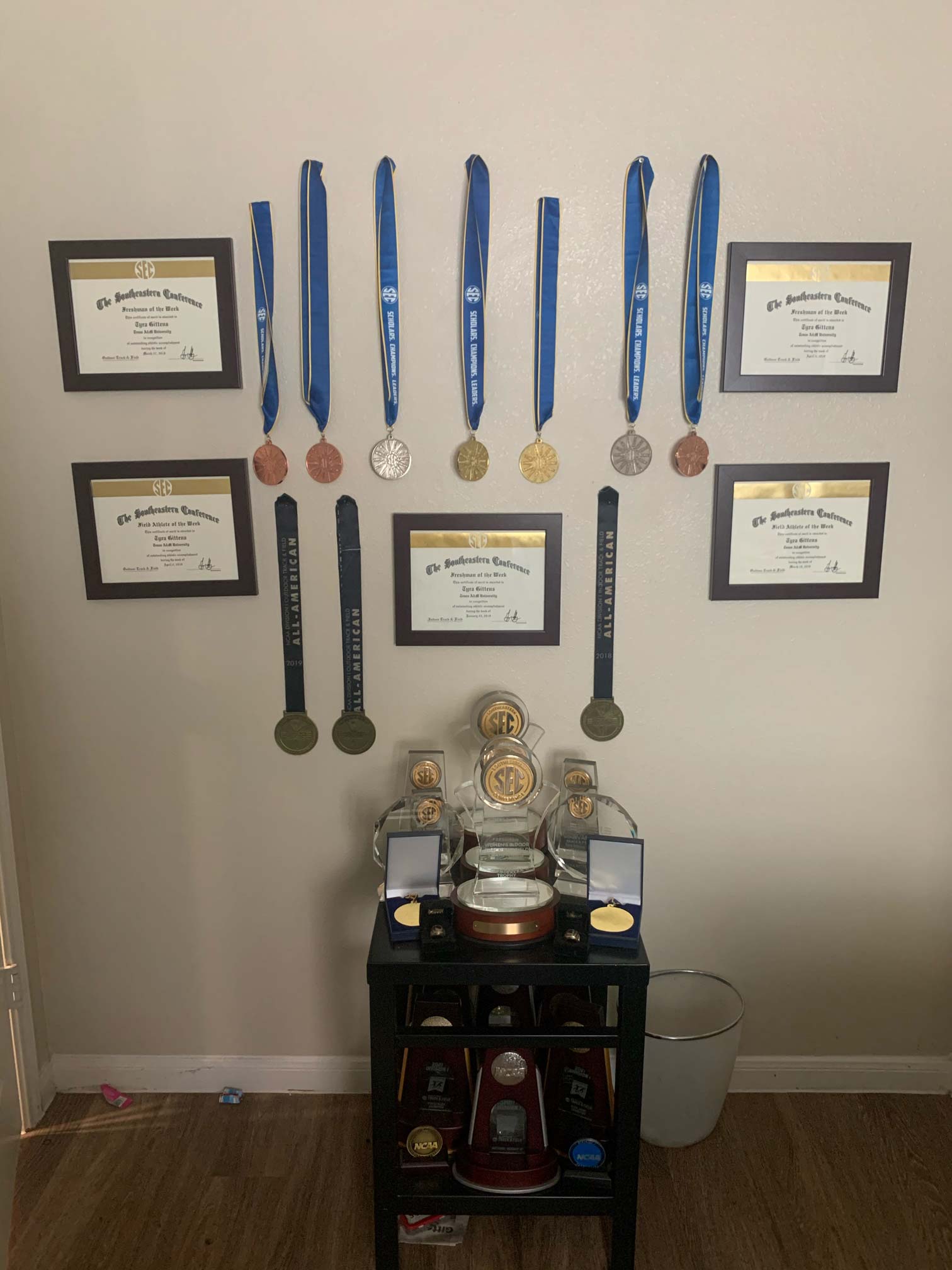 “I think she's the greatest female athlete that we've had maybe ever here.”

Gittens is among the best open high jumpers and open long jumpers in the college ranks, which are events where she collects big points.

At the 2021 NCAA Indoor Track & Field Championships, Gittens helped the Aggies place second overall while winning the national championship in the pentathlon and high jump. Her 26 points rank No. 3 all-time in collegiate history.

Gittens scored nearly 38 percent of A&M's team total at the 2021 NCAA Outdoor Track & Field Championships while winning the heptathlon, placing second in the long jump and finishing third in the high jump. Her 24-point performance was the most points scored by a female athlete at an NCAA meet solely in field events.

“She's done more for her team than any athlete that I know,” Brady said. “She is the ultimate team player.”

Gittens was named the USTFCCCA National Indoor and Outdoor Field Athlete of the Year and is a finalist for The Bowerman, an annual track and field award given to the top female and male collegian athletes. Former A&M star Jessica Beard won The Bowerman in 2011.

Whether she wins it or not this year, Gittens already is on the Mount Rushmore of female athletes at A&M. That is saying something considering the rich history of the program since Henry arrived in 2005.

“I think she's the greatest female athlete that we've had maybe ever here,” Henry said. “When you think jumping right at 22 feet in the long jump and high jumping 6 foot 4 and running as fast as she runs - 23.3 in the 200 meters - those are really significant. I think most people would know Jackie Joyner-Kersee. She's scoring a little more than Jackie Joyner-Kersee (in those events). That shows you who she is.” 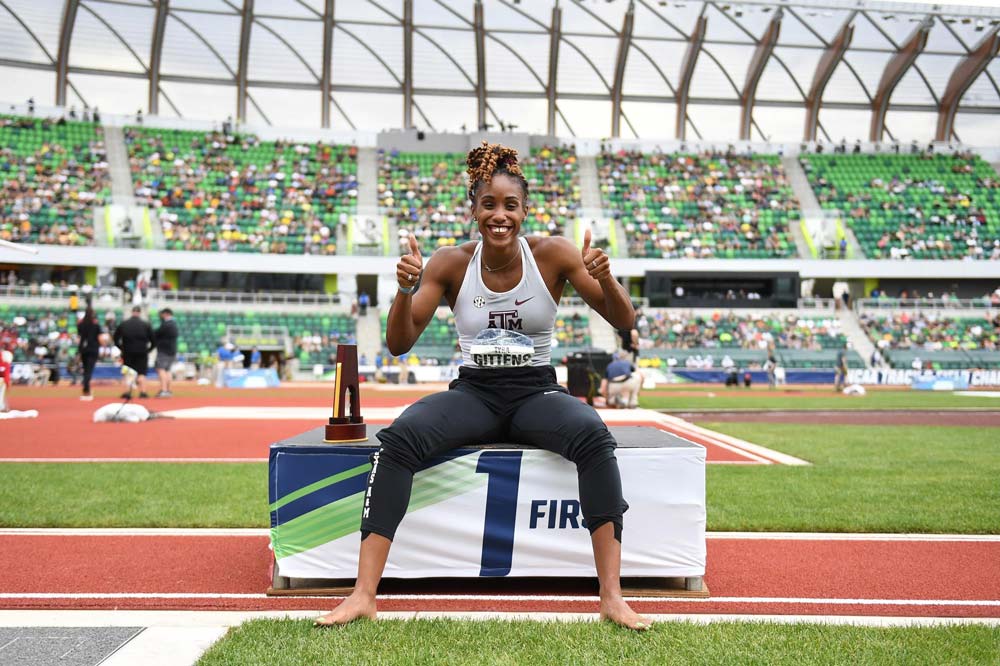 Gittens also is a sister to six siblings, a former gymnast, a dog walker, an accomplished singer, an avid television watcher and a novice golfer. A longer-than-expected rehab from a torn meniscus her sophomore season taught Gittens that she is more than a track and field athlete.

“Track Tyra doesn't have to be separate from regular Tyra,” Gittens said. “Track will always be a passion for me, but it isn't me.”

At A&M, Gittens is pursuing a degree in university studies with a minor in communications and journalism. She's passionate about self-development and wants to use her opportunity at A&M to help others through development programs after college.

“Being from a family of seven kids, my parents did not know how they were going to get us all to college,” Gittens said. “My scholarship has taken that worry away from my parents and for that alone I am forever grateful.”

Those who know Gittens best call her energetic, which is how track finally found her.

Gittens was born in Saint Augustine, Trinidad and Tobago, but has spent most of her life in the United States. She graduated from high school in Nashville, Tennessee, as the most decorated female high school track and field athlete in the state's history, with 17 gold medals in four seasons.

Tyra started her athletic career as a gymnast before trying volleyball. One of her older sisters, Nikki, had a standout volleyball career at South Alabama, and a younger sister, Nsia, is a freshman volleyball player at Southern Illinois.

“Little did they know track was my calling,” Tyra said, laughing.

Tyra's track career began by chance when she tagged along with Nikki to a summer track program in Nashville.

“Nikki was babysitting for Tyra, so Tyra was at practice but not practicing,” Precision Track Club coach Jan Pippin, a former heptathlete at the University of Tennessee, remembers. “I saw Tyra hopping around outside the track. I told Nikki, 'Go get your sister.' I think they thought they were in trouble. So maybe by the next weekend I ended up with the three of them.

“Tyra was little, maybe 10 or 11 or maybe 12. She was young. She had never done track before, and we just started from scratch. My coaching staff and I spend a lot of time teaching proper technique, so I took my time with Tyra. I could tell right away she was a special athlete, but I just didn't get in a hurry to get results out of her.”

The results have taken care of themselves since.

Medals, certificates and trophies fill one of the walls and a makeshift trophy case in Gittens' apartment. One day, Gittens hopes to add Olympic and World Championship medals to her collection.

Thanks to her record-setting long jump at the SEC outdoor championships in May, Gittens will have her first chance at adding one of those medals very soon. The jump of 6.96 meters qualified Gittens to compete for Trinidad in the Tokyo Games this summer.

With her bubbly personality and charisma, Gittens has a chance to become the next Jackie Joyner-Kersee, a name instantly recognizable even to non-track and field fans.

“The queen of track and field definitely inspires me every day,” Gittens said. “Like every day, I go look and I read about her, because right now, at this time in my life, I want to see what she did. I don't want to copy her, but I want to see how she handled everything and how she got to where she was. That's the journey I'm on right now. It's very motivational.”