March is always one of the busiest months for athletics in Aggieland.

The latest edition of March Madness on the hardwood and the return of SEC competition to Blue Bell Park and Davis Diamond represent some of the marquee events that highlight the sports calendar during the third month of the year.

After beginning the spring sports season as scheduled, March 2020 also featured Texas A&M’s spring break on March 9-13. Following the traditional mass exodus of students from Aggieland, the 12th Man Foundation staff departed the office on Tuesday, March 10, planning to enjoy a few days off before reuniting with co-workers the next Monday.

Within a few short days, fate would intervene and bring sports across the country to a screeching halt.

“When our staff left the Foundation offices on March 10, we all knew conversations were heating up and there were possibilities of cancellations and closures,” said 12th Man Foundation President & CEO Travis Dabney. “The speed at which everything moved over the next several days was shocking to say the least.” 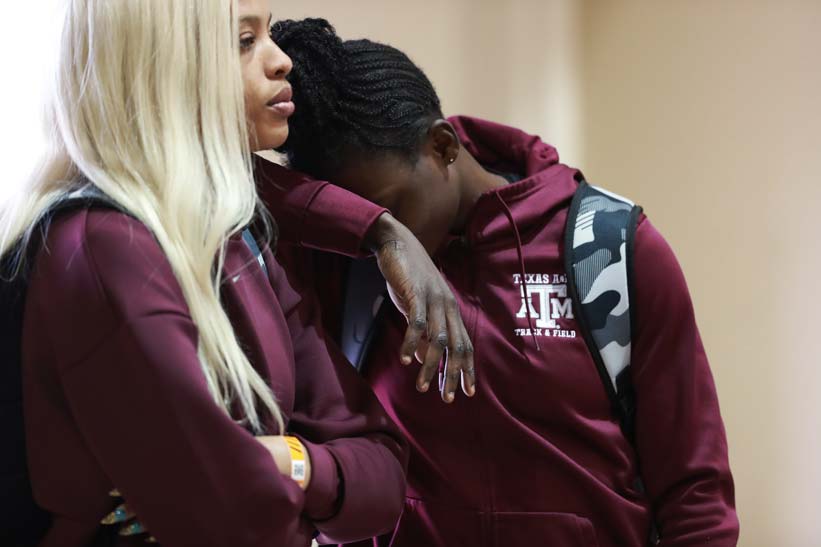 “The health, safety and well-being of our student-athletes, staff, coaches and people in the community is what is most important.”

As media outlets transitioned into seemingly never-ending and single-minded coverage, sports seemed trivial while people around the world struggled to combat the coronavirus (COVID-19) health crisis. However, it was the abrupt halt of competitive sports that overtly underscored the unique and serious reality of the situation.

The first major intersection between the crisis and sports came on March 10 as the Ivy League announced the cancellation of its men’s and women’s basketball tournaments, slated for March 13-15.

Soon A&M was officially drawn into the mix as the following day, on March 11, it was announced the SEC Men’s Basketball Tournament would continue, but behind closed doors and without fans.

That same day, not far from Aggieland, the of City of Houston and the Houston Health Department ordered the Houston Livestock Show and Rodeo closed. The whirlwind changes marched on that evening. In Oklahoma City, an NBA game between the Thunder and Utah Jazz was very publicly called off just moments before tipoff, foreshadowing another massive ripple effect that was soon to sweep over all major professional sports. Within 24 hours, competition in the four major North American sports leagues would be suspended indefinitely.

More dominoes fell the next day (March 12) as the SEC abandoned the remainder of its men’s basketball tournament as well as all league competition until March 30. Later that afternoon, the NCAA declared the cancellation of all winter and spring championships, wiping out the crowning competitions for college baseball, basketball, golf, softball, tennis, swimming and diving and track and field.

One day later, on March 13, the SEC extended cancellations until April 15 before eventually making the difficult decision to redline all competition for the remainder of the 2019-20 athletic year on March 17.

In total, 61 athletics events scheduled to be hosted on the A&M campus were struck from the calendar. 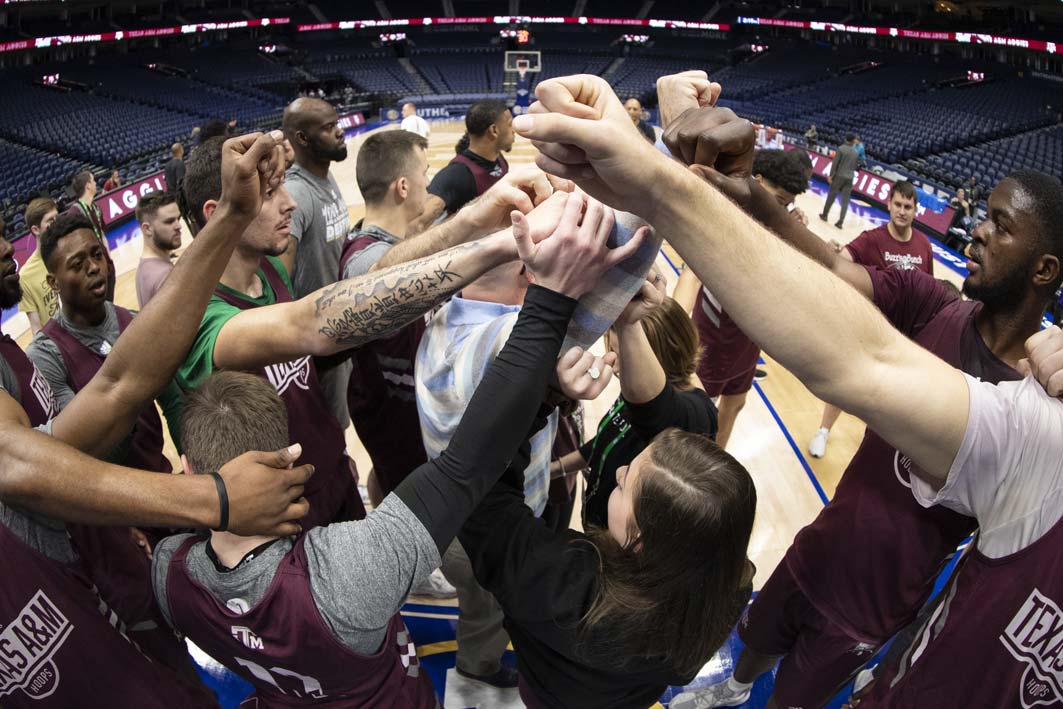 Along with their peers from across the country, Aggie student-athletes and coaches were swept up in the rapid changes that were unforeseen just days before.

Pat Henry’s track and field squad was in Albuquerque preparing to compete for a national title.

“We were at the NCAA Indoor Track & Field Championship on the track warming up,” said Henry, “and they came over the public address to announce the meet had been canceled.”

Over 1,000 miles away in Nashville, the Aggie men’s basketball team had just finished a walk-through and was hours shy of tipping off its first SEC Tournament in the Buzz Williams era.

“When shootaround was over, I go up to my room,” recalled Williams, “and as soon as I walked in, my wife told me the tournament had been canceled.”

Back in Aggieland, Gary Blair and his women’s basketball players were days away from finding out their destination for a 15th consecutive trip to the NCAA Tournament, while fellow A&M coaches and student-athletes were preparing for their next opportunity to compete.

Their experiences were just a few of many across the country, as a unique menace transcended far beyond competition and national borders. Administrators and coaches, who themselves were starved for answers, focused on communication even in the absence of a clear roadmap for what was still to come.

“I spoke to our guys (on March 13) and told them that so many things had changed over the last 30 hours and I anticipate even more changes are coming,” Williams recounted in the days following the cancellation of the SEC Tournament. “We can’t control those changes, but we can control how we process them and how we respond.” 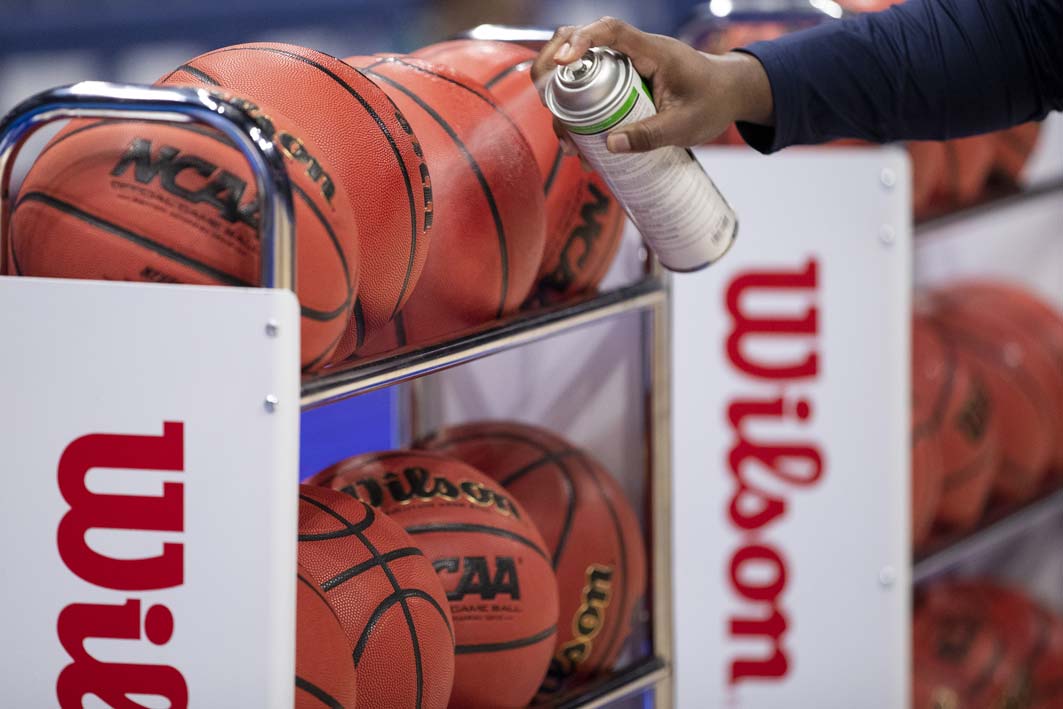 REACTION TO AN UNPRECEDENTED SITUATION

As priorities and agendas radically changed to reflect the shockwave traversing the country, decision-makers like Texas A&M Director of Athletics Ross Bjork focused on the most important issues as the scope of the crisis broadened.

“The health, safety and well-being of our student-athletes, staff, coaches and people in the community is what is most important,” Bjork said at the time. “We’re all impacted by this and we have to take it seriously every step of the way.”

As area schools announced closures and phrases like “social distancing” and “flattening the curve” surged to the top of conversations, the 12th Man Foundation’s leadership team, along with their counterparts in the athletics department, quickly moved to address the challenge of altering operations to continue servicing donors and ticket buyers including ultimately processing refunds for canceled home events.

Monday, March 16, was expected to be the day when staff members returned to the office and swapped stories of how they spent their few days off. Instead, people began to heed advisories from health and governmental leaders to stay home.

Due to the efforts of the organization’s Business Intelligence & Technology Services team, the 12th Man Foundation quickly pivoted business operations, including in-bound phone functionality, to allow staff to fulfill duties remotely by March 19.

“I am proud of our organization and how it planned and responded to the shelter-in-place environment,” Dabney said. “Our staff rose to the challenge to meet the needs of our donors and ticket holders as we all went through this unprecedented time.”

The case was similar for Texas A&M University and Aggie Athletics, as individuals and units began finding ways to leverage technology to function remotely.

As the calendar flipped, it became apparent that the full impact of the COVID-19 health crisis will resonate far beyond the month when its unwelcome interruption historically changed the world of sports.

The competition and pageantry we all love will return and again give Aggies opportunities to celebrate their shared passion for Texas A&M through athletics. Following the unforgettable events of March 2020, it will be a familiar and welcome experience.