Ty Warren tried to find a place to hide in the stands at Davis Diamond, but as a former NFL defensive tackle, it was hard to be inconspicuous. At his daughter’s high school softball games, Warren sometimes sat in his truck.

Brionna “Bre” Warren just completed her freshman season as the left fielder for the Aggies, and Ty usually found a spot behind the outfield fence.

Ty’s days as a star athlete are behind him; Bre’s are ahead of her. So, Ty wants the focus to be on her present, not his past.

“I want to stay out of the way and just watch the game,” Ty said. “I want her lane to be her lane. I know the lineage is there, but I don’t want to take the spotlight away from her. I want her to blaze her own trail, and she’ll do that.”

Bre knew exactly what she was getting into when she chose to stay in College Station, where everyone knows her father or knows of her father. Her younger sister, Brielle, recently signed to play volleyball at Purdue.

Bre had an opportunity to go elsewhere, too, after playing at College Station High School. Yet, she chose the same path as her father.

“I obviously feel some type of pressure, but not too much,” Bre said. “My dad always taught me from a young age that I’m my own person and my own athlete. People are always going to associate my name with his, but just stay true to myself and don’t make anything too big.”

“I grew up in College Station, so I knew how I fit in here. I looked at maybe going somewhere else, but I’ve always liked A&M, and it just felt like home.”

“I want her lane to be her lane. I know the lineage is there, but I don’t want to take the spotlight away from her. I want her to blaze her own trail, and she’ll do that.”

The Aggies didn’t recruit Bre because of her father. She ranked No. 9 in the country as a senior, one of the most coveted recruits in the nation.

Bre quickly earned a spot in the lineup, starting all but two games. She finished the season with the third best batting average on the team while earning All-SEC Second Team and Freshman Team honors.

“The last thing you want to do is recruit a great former athlete’s kid and not have them be good, said A&M softball coach Jo Evans, “because then they don’t get in the lineup and you’re being questioned all the time about that and taking heat for it. I think it kind of makes it even harder on those kids, because they have to be really good. They’re always going to get compared to their parents. Bre did all this on her own. She has a promising career ahead of her for sure.”

Bre’s first offer came from the University of Texas in the eighth grade. She also considered Florida State and LSU before committing to A&M, which was her only official visit.

She grew up attending A&M softball games and became a big fan of Amber Garza, a third baseman who finished her career in 2014. Bre knew when she was a high school freshman that A&M was where she hoped to continue her career.

“I grew up in College Station, so I knew how I fit in here,” Bre said. “I looked at maybe going somewhere else, but I’ve always liked A&M, and it just felt like home.”

Ty nearly went to the University of Tennessee. Texas also had a strong interest, but family considerations won out.

“UT at that time was doing well,” said Ty, who received his degree in agriculture development in 2010. “Honestly, I couldn’t see myself coming home at spring break with some burnt orange on. That was probably going to lead to a fight or something.” 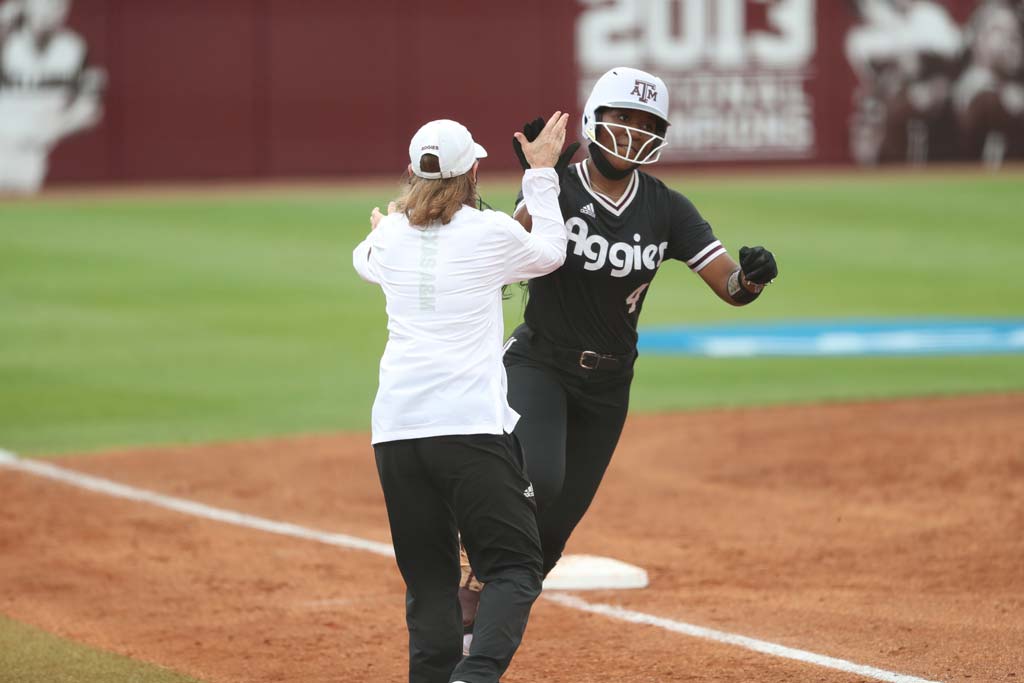 Ty totaled 144 tackles and 13.5 sacks and blocked two field goals in his four seasons in Aggieland. He played in three bowl games. The Patriots made him the 13th overall choice in 2003, and he won two Super Bowl rings, earned All-Pro in 2007 and finished with 20.5 sacks.

“When I was little, we would go to his games with the Patriots,” Bre said. “I wouldn’t pay attention. I’ve seen a few highlights. ‘Oh, he’s actually kind of good.’ I’ve grown to love football more. I kind of wish I was this age when he was playing. I was so young I just wanted to play with my friends and figure out what we were going to eat.”

Ty and his wife, Kesha Drayton, whom he met at the local Boys & Girls Club, had six daughters. Kesha is a former basketball player, so the girls inherited athletic ability from both sides.

Bre started in gymnastics, gaining strength and body control. She also played lacrosse and volleyball, finally finding softball when she was 12. Softball became Bre’s first love, because it was outdoors and allowed her to “play in the dirt.”

The Warren girls gained their work ethic and a sense of responsibility on the family’s 300-acre ranch. They tended to cattle and pigs.

Bre started showing cattle when she was in middle school and won grand champion in Houston. The girls also won other showings in Austin, San Antonio and Fort Worth.

Bre’s alarm went off at 5 a.m. for feeding of her heifers. After school and practice, Bre returned home to brush and groom them. It mostly was a labor of love.

“I was really grateful to be showing,” said Bre, who was a member of the Brazos County 4-H. “I didn’t realize how many characteristics it instilled in me until recently. It taught me things like communication and time management. Showing cows is really important.”

Bre’s time now is spent hitting, fielding, lifting and studying as she tries to take the Aggies’ three-time national championship softball program back to the future.

Ty and his uncle, Curtis Dickey, both are in the Texas A&M Athletic Hall of Fame. A father and daughter have never both earned that honor.

No one believes in Bre’s future more than her father.

“She’s a benefactor from everything that I went through, and my wife witnessed me going through while I was playing,” Ty said. “I was able to give her those lessons that I didn’t have when I was coming through.

“I had a good career at A&M, but her career at A&M is probably going to eclipse anything I’ve done based on who she is and what she knows. I think she’s going to have some pretty good years there.”