In recognition of his incredible philanthropic contributions to Texas A&M University and lead gift to the Centennial Campaign, the 12th Man Foundation and Texas A&M Athletics proudly honor Wayne Roberts '85.

In recognition of his incredible philanthropic contributions to Texas A&M University and lead gift to the Centennial Campaign, the 12th Man Foundation and Texas A&M Athletics proudly honor Wayne Roberts '85.

Motivated to leave a legacy and create a brighter future for Texas A&M, Roberts has stepped forward and is helping to lay the foundation for a new era of excellence for Texas A&M Athletics through his significant Centennial Campaign lead gift toward the redevelopment of the Bright Football Complex.

“I want Texas A&M to be great in everything,” Roberts said. “That means academically and athletically, while also enhancing our culture and being true to our core values. I'm incredibly fortunate, and Texas A&M has given me so much over the years. The least I can do is give back, and the Centennial Campaign will further vault A&M Athletics to greatness.”

A steadfast fan and supporter of Texas A&M Athletics, Roberts' contributions have not only been financial, but he has been an important leader as a member of the 12th Man Foundation Board of Trustees and chair of the organization's finance committee.

“There is no greater friend to Texas A&M Athletics than our very own Wayne Roberts,” Texas A&M University System Chancellor John Sharp said. “When Aggies win the next championship, Wayne will have had played a big part in it.”

“Wayne Roberts is the embodiment of the Aggie core value of selfless service,” said Texas A&M President M. Katherine Banks. “His leadership across many initiatives at Texas A&M, both academic and athletic related has made a tremendous impact on the lives of our students, faculty and staff in a very profound way.”

In addition to being a season ticket holder for Aggie Football, Basketball and Baseball, Roberts has provided extraordinary support for the historic redevelopment of Kyle Field, past improvements to the Bright Football Complex and significant support for Aggie Basketball, Baseball and Golf.

“Texas A&M Athletics' mission of creating opportunities through championship athletics is not achievable without the loyal and selfless support of incredible people like Wayne Roberts,” said Texas A&M Director of Athletics Ross Bjork. “His generous Centennial Campaign gift toward the redevelopment of the Bright Football Complex will help ensure our football program has the resources and competitive edge needed to succeed at the highest level. Wayne is leaving a legacy that will benefit Aggies for generations to come through his remarkable spirit of generosity and love for Texas A&M University.” 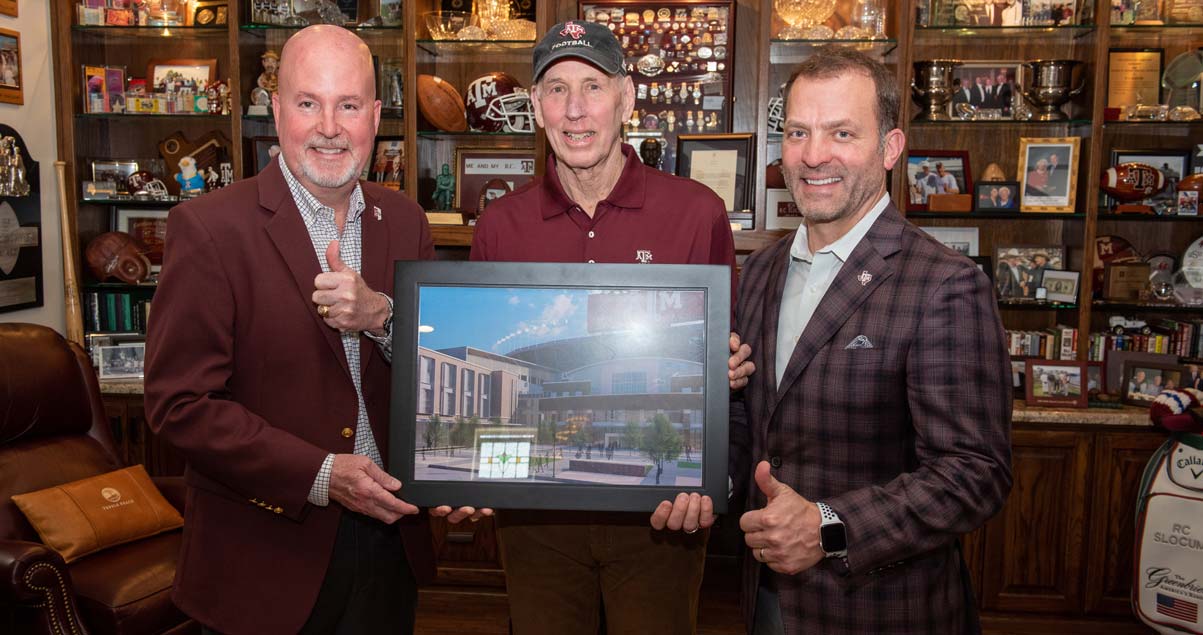 “Wayne is one of the most caring Aggies I have ever met,” said Texas A&M Head Football Coach Jimbo Fisher. “Not only with this wonderful gift, but as a leader in the 12th Man Foundation and in so many other areas of Texas A&M University. He is always there to support us in everything we do. He is a great friend and a great Aggie.”

Roberts enjoys a special connection with Aggie Basketball as the Shannon '86 and Wayne '85 Roberts Texas A&M Men's Basketball Student-Athlete Center, which opened in 2017, was named in recognition of their lead gift to the project.

“If it says Texas A&M on the jersey, I want us to excel,” Roberts added. “I want to make sure our student-athletes, coaches and staff have everything they need to be the best versions of themselves and are in a position to win at the highest level, both on and off the field.”

Roberts again stepped forward with a selfless gesture last spring when his support made it possible for the court at Reed Arena to be named in honor of legendary Aggie Women's Basketball Head Coach Gary Blair, who ended his Hall of Fame career on the hardwood at the conclusion of the 2021-22 season.

“Wayne has demonstrated a special level of commitment to Texas A&M University and Texas A&M Athletics,” said 12th Man Foundation President and CEO Travis Dabney '96. “His legacy of support has been felt throughout our campus and will not only impact the future of Texas A&M Athletics but all Aggies. His selfless service and spirit of generosity are deeply meaningful and appreciated.”

As a first-generation college graduate, Roberts is devoted to pushing Texas A&M University toward excellence. Notably, he stands out as an exceptional benefactor of Mays Business School, which honored him as an Outstanding Alumnus in 2019, as well as the lead donor for The Association of Former Students' project to revitalize Aggie Park, in honor of his late wife Shannon '86.

Roberts is a graduate of Texas A&M with a BBA in Business Analysis and a Master of Business Administration. He currently serves as President and Chief Executive Officer of Abrigo, the leading provider of enterprise risk management solutions to America's community financial institutions.